‘New year, new tennis season, and of course you TransGriot readers know I’ll be keeping up with my fave tennis playing siblings in Venus and Serena Williams.

This will be the first time since the 2017 Australian Open final that both sisters will be playing in this tournament, the first Grand Slam of the 2019 tennis calendar.

You’ll recall after Serena won that 2017 Open title, her 23rd overall, in straight sets, she discovered she was 24 weeks pregnant

The Williams sisters won’t meet in the Aussie final this year, but potentially the fourth round because they are not only on the same side of the women’s singles draw, they are in the same section of it. Their 2019 run in the Aussie Open began with Big Sis taking on 25th seeded  Mihaela Buzarnescu of Romania in the first round.   Big Sis had to work after dropping the first set in a tiebreaker.   She flipped the script by winning the second set in the tie breaker to even the match, and then blowing out Buzarescu in the third set. 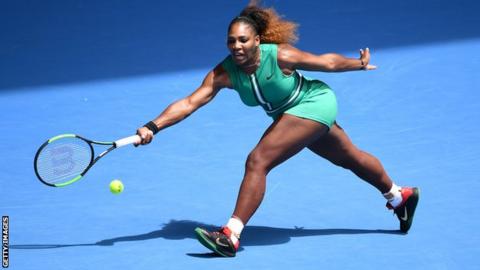 16th seeded Serena started her quest for her 24th Grand Slam title with an opening round match at Rod Laver Arena  with Germany’s Tatjana Maria.

Little Sis wasted little time in administering this tennis beatdown, with her spending a grand total of 49 minutes on the court to send Maria packing.  She fired 22 winners in this match, and took the opening set in just 18 minutes

She punched her ticket to what looks to be a much tougher second round match with Canada’s Eugenie Bouchard after a 6-0, 6-2 straight set win.