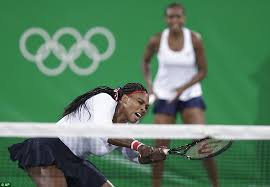 This Olympic trip to Rio has not been a good one so far for my fave tennis playing siblings.

On Saturday I got to painfully watch fifth seeded Venus go from being two points from winning her match and moving on to a second round match in the Olympic tennis singles tournament to a WTF loss to Belgium’s Kirsten Flipkens 4-6, 6-3, 6-7 (5-7) .

The pain got worse for we fans of the Williams sisters as we watched the once unbeaten Olympic in doubles and three time Olympic doubles gold medalists have a bad day at the office.

The number on seeded doubles team and defending Olympic champions shockingly suffered their first ever Olympic doubles loss after 15 straight wins in the first round to Barbora Strycova and Lucie Safarova of the Czech Republic in straight sets  3-6, 4-6.

But all is not lost .  You will see a Williams sister playing tennis in Rio.   Number one seeded and defending Olympic singles champion Serena is still alive in the Olympic women’s singles competition.   She beat Australia’s Danila Gavrilova 6-4, 6-2 to move on to her second round match against Alize Cornet of France.