It has been a French Open at Roland Garros in which they have battled through rain delays, cold temperatures and the field being decimated by upsets and injuries, but Serena Williams has survived.

She dispatched the red hot Kiki Bertens of the Netherlands in straight sets at Court Philippe Chatrier to punch her ticket to the French Open finals 7-6 (9-7), 6-4 but she had to fight for it.

Trailing 4-2 and noting that Bertens was hobbled a bit by a strained left calf, Little Sis zeroed in on that to flip the match script.  While everyone on tour knows that she can hit with power and is undeniably the best shotmaker in the women’s game, many people forget that she can also hit an amazing deft drop shot, and she repeatedly deployed it against Bertens to get back in the match.. Like the great champion she is, Serena survived and advanced.  She’s now made it to her 27th Grand Slam final and her second consecutive French Open final.  Serena is also playing for her 22nd Grand Slam title to pass Steffi Graf and get her closer to Margaret Court’s 24 Grand Slam titles.

Standing in her way of making more tennis history is number four seed Garbine Muguruza of Spain, who dispatched 21st seeded Samantha Stosur of Australia in straight sets 6-2, 6-4 in the other semifinal at Court Suzanne Lenglen. 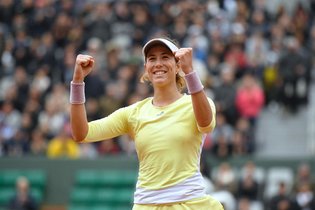 If that name sounds familiar, she was the player responsible for shockingly knocking Serena out in the 2012 French Open second round in lopsided fashion, which Little Sis beating her in last year’s Wimbledon final in straight sets.

Will she handle her business tomorrow and make this business trip to Paris a successful one?   We’ll see.