It took her three sets, but number one seed Serena Williams fought through a bad day at the office and a short rain delay  to prevail over a determined Yulia Putintseva  5-7, 6-4, 6-1 to punch her ticket to the French Open semifinals.

Serena got off to a slow start in large part to the 24 unforced errors she sprayed all over Court Philippe Chatrier in the first set.  Despite that display of error infused tennis, she was serving at 5-5 in the first set up 40-love but got broken, then Putintseva took advantage of the huge gift to serve out the set and become the first person in this edition of the French Open to take a set from the tournament’s number one seed.

Williams ended up with 43 unforced errors to just 16 for Putintseva, but offset that with 36-16 advantage in winners.  Little Sis woke up just in time at 4-4 to rally and take that second set with some timely assistance from Putintseva.  She was down two break points but held serve to take a 5-4 lead, then broke Putintseva to take the second set to even the match when Putintseva double faulted.

Serena then found her A game and blew out Putintseva in the third set to take the match. 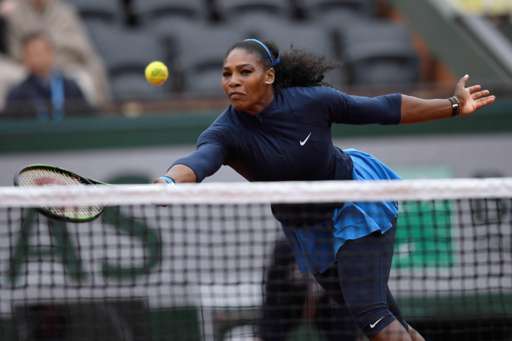 She will face the red hot Kiki Bertens of the Netherlands, who is on a roll and has taken down four seeded players in number 3 Angelique Kerber, number 25 Daria Kasatkina, number 15 Madison Keys and number 8 Timea Bacsinszky on the way to the semifinals and qualifying for the Dutch Olympic tennis team .

Fourth seeded Garbine Muguruza and 21st seeded Samantha Stosur will square off in the other women’s semifinal.match