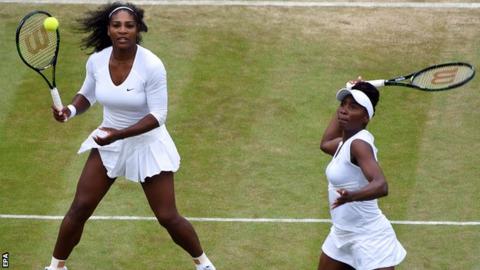 For the first time since they won it all in 2012, the Williams sisters are playing in the Wimbledon ladies doubles title match.

They knocked off the eight seeded duo of Julia Gorges of Germany and Karolina Pliskova of the Czech Republic 7-6 (7-3) 6-4 on No. 1 Court to advance and play for a shot at their sixth Wimbledon doubles title and 14th Grand Slam career doubles title.

And just a reminder for all you peeps in the doubles competition at the upcoming Rio Olympic Games, Big and Little Sis are the three time doubles gold medalists, winning in 2000, 2008 and in 2012 at their fave tennis venue.

The women standing on the opposite side of the net that will try to stop them from making more tennis history will be the number five seeded doubles duo of Hungary’s Timea Babos and Yaroslava Shvedova of Kazakhstan.   They are on a roll after knocking off the number one seeds and defending Wimbledon doubles champs Martina Hingis and Sania Mirza in the quarterfinals 6-2, 6-4 to get to the semis, and a 6-4, 6-2 straight set win over the tenth seeded American duo of Raquel Atawo and Abigail Spears to advance to the doubles final.

Should be an interesting Saturday for the Williams sisters, and you never bet against them when they are playing matches at their personal SW19 tennis playground called the All England Club.