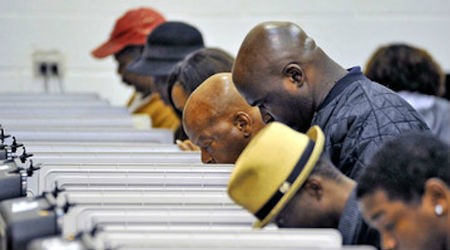 If you’re planning on voting in our upcoming presidential election, better get busy and make sure you’re registered to do so.

Some of the deadline dates are coming up fast.   Here’s the list of voter registration deadlines for US states  and territories.  This is the last possible day you can register in these states and territories.

In North Dakota you aren’t required to register. but you must be a US citizen, 18 years old by Election Day.  live at your address by October 9, not be in jail or prison for a felony conviction, not be considered mentally incompetent by a court and have acceptable forms of ID to do so in person or by mail.

October 8 in  Mississippi, South Carolina and the US Virgin Islands,

October 11 is deadline day for eleven states that includes Texas.   For those of you live in the Lone Star State, you need to make that registration happen and have that blue voter registration card by this date.

The other ten states in which you need to handle your electoral registration business by this date are Florida, Georgia, Indiana, Kentucky, Louisiana, Michigan, New Mexico, Ohio, Pennsylvania, and Tennessee.    Florida,  Georgia, New Mexico, Ohio and Pennsylvania are 2016 swing states, and so if you wish to determine who the next POTUS will be, get busy getting registered.

So peeps in the Tarheel State, if you want to kick Pat My Crotch out of the governor’s mansion along with the unjust GOP controlled NC legislature, have until this date to register for the election.

October 31 in Washington     So if you peeps living there don’t want the horrifying prospect of a President Donald Tump, you must be registered in your state by this date.

November 1 is the deadline for Utah   The Beehive State is one of the surprise states in play in Election 2016.