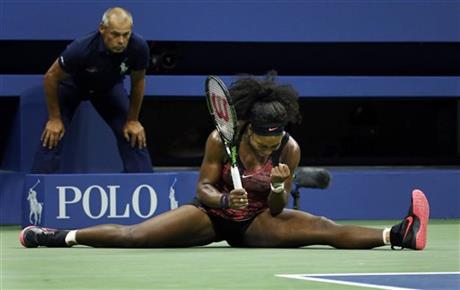 Today Venus and Serena were on the Arthur Ashe Stadium courts playing their fourth round US Open matches with quarterfinal berths at stake.

Which sister made it to the quarterfinals?   Both of them.

23rd seeded Venus got this Sunday afternoon of tennis at Arthur Ashe Stadium off to a great start with a dominating performance against Estonian qualifier Anett Kontaveit, who was playing in her first US Open and got to the fourth round after beating Madison Brengle in three sets

Big Sis took only 50 minutes to efficiently punch her ticket to the quarters with a 6-2, 6-1 straight set victory over Kontaveit and set up her first trip to the US Open quarters since 2010.

The question then became who would Venus play in that quarterfinal?

Serena took the Arthur Ashe court moments later for what was expected to be by tennis pundits the tougher match of the afternoon against 19th seeded Madison Keys.

Serena faced and beat Keys earlier this year in the Australian Open semifinals, and wasn’t playing with the tennis youngling.   Little Sis was on her A++ game from the outset, but the 20 year old Keys was hanging with her booming serve for booming serve and shot for shot as both stayed on serve .

Serena got a critical service break thanks to Keys double faults and unforced errors to put her up 5-3 and allow her to close the first set on her racquet.

The second set was just as close, with both players staying on serve and amazing shots being hit until once again Keys got broken to put Little Sis up 4-3. Serena held serve to push the lead up to 5-3, and when Keys needed to come up with the clutch serve to save match point,  she double faulted to hand little Sis a 6-3, 6-3 straight set victory that took only 68 minutes to complete.

Four down, only three more match wins to tennis history    But that next match will be against her big sister.

At 7 PM EDT on Tuesday night, we should have a sold out Arthur Ashe Stadium and a huge television audience watching the first US Open quarterfinal between the Williams Sisters at Flushing Meadow since 2008 with huge stakes for both sisters.

Venus is playing for her third US Open title, Serena for the first calendar year Grand Slam since 1998.  Which sister will prevail?.