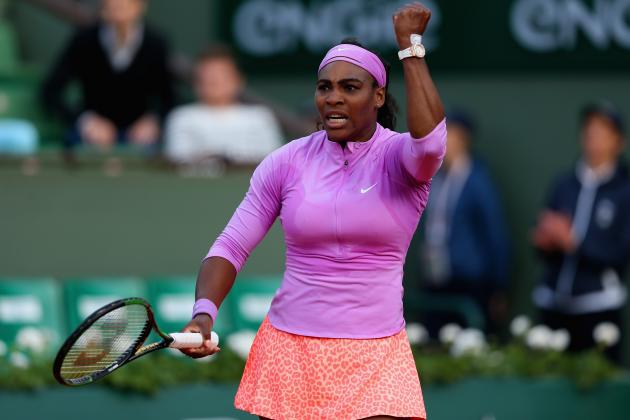 Serena Williams Roland Garros business trip is a step closer to a successful conclusion, but she had another slow start that almost derailed it.

She entered her fourth round match with Sloane Stephens mired in a puzzling pattern of getting of getting off to a slow start that puts her in a bind, then clawing back to win the match.

And once again, Serena dropped the first set 1-6 to Stephens, who hadn’t beaten Williams since the 2013 Australian Open quarterfinal upset.

Serena woke up after trailing 0-2 in the second set to take it 7-5, and even the match, then punched her ticket to the quarterfinals by taking the third set 6-3 to close out another comeback and face Sara Errani.

In her quarterfinal match with Errani, who has never beaten her, the world number one was determined to avoid the bad starts that had plagued her in her last three French Open matches.    Serena took only 63 minutes to overpower her 6-1, 6-3 in a match that included a 123 mph ace.

She’s baaaaack….and that may be bad news for Williams’ semifinal opponent Timea Bacsinszky.  Serena is closing in on her third French Open title, 20th Grad Slam title overall and her third straight Grand Slam since taking the 2014 US Open.

If she gets past Bacsinszky tomorrow, she’ll face the winner of the other semifinal being contested between seventh seed  Ana Ivanovic and number 13 seed Lucie Safarova.