It’s Thanksgiving Day and in addition to us scarfing up turkey in a few hours, we’ll get to start NFL Week 12 with a Thursday NFL football feast.

Three games are on the menu highlighted by the clash at Jerry World between the unbeaten Carolina Panthers and the Arlington Cowchips who just got Tony Romo back. The Philadelphia Eagles will take on the suddenly surging Detroit Lions in the early Turkey Day game and the nightcap game features the Green Bay Packers hosting another NFC North Division hatefest between themselves and the Chicago Bears 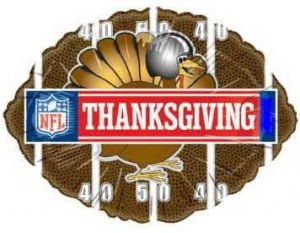 As for our prognostication contest, it’s tight going into the last five weeks of the season with me and Eli closing fast behind defending champ Mike.

Eli and I tied for Week 11 honors thanks to me listening to my football intuition and reversing my Dolphins-Cowboys pick before I posted it as Mike halted his losing streak.

Meanwhile, the hot streak Eli is on continued with him either winning or tying for weekly honors for now four straight weeks.  He’s back in contention for the 2015 TransGriot NFL Prognostication title that Mike is trying to become the first person to win in back-to-back seasons.

With the bye weeks over, we’re back to picking 16 games for the remainder of the 2015 NFL season, and those next five weeks will determine which teams are playoff bound, which ones may be Super Bowl bound, and which one will be picking first in the 2016 NFL Draft.

Time to get busy with my Week 12 picks