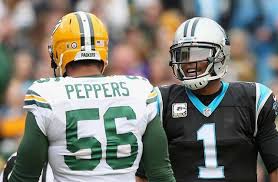 We’re now in the second half of the 2015 NFL season as the race for playoff spots starts to take shape.  Believe it or not, thanks to the putrid state of the AFC South this year, the Texans are still a half game out of first place despite a 3-5 record.

If it weren’t for Denver’s 4th quarter meltdown versus Indianapolis to drop them from the ranks of the unbeaten teams, the Texans would be in first place going into their Monday night game against the undefeated Bengals.

While New England is not a surprise survivor in the ranks of the NFL unbeatens, the Cincinnati Bengals and Carolina Panthers are.  With the Panthers win over Green Bay Sunday in Charlotte, they are the lone NFC unbeaten squad and have seized control of the NFC South, the race for the NFC’s number one seed and home field throughout the NFC playoff bracket.

But there is still a lot of football left to play.

Speaking of races, the race for the 2015 TransGriot NFL Prognostication title just got a little tighter after defending champ Mike stumbled to a 6-7 record as 2013 champ Eli had another solid week thanks to him correctly picking both of his Week 9 upset specials to win this week..

Eli has a little momentum after winning two straight weeks, but can he keep it up?

It’s now Week 10.  Only seven weeks left in the regular season.  Teams on byes this week are the Falcons, Colts, Chargers and 49ers, so that means only 14 games to pick this week.