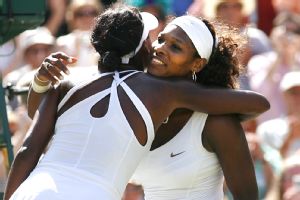 My favorite tennis playing siblings had a forgettable trip to Stade Roland Garros and its clay courts last month as they both exited the 2014 French Open earlier than planned due to second round upsets.

But starting today through July 6 is the Grand Slam tournament at the All England Lawn Tennis and Croquet Club in London which the Williams sisters have so thoroughly dominated it I call it ‘Williams’-don.

And yeah, can’t forget to remind the Williams haters of the Olympic gold medal Serena won in the London Games and the London Olympic doubles title she and Big Sis won which was ahem, played at the All England Club.

The grass courts are well suited to their power game, and with Centre Court’s retractable roof, when it’s closed, they become even more lethal.

But it’s the 2014 edition of The Championships, and both are seeking rebounds from the double disappointments in Paris and Serena’s shocking fourth round upset loss here last year.

The Williams sisters are also entered in the ladies doubles tourney as they seek to capture their first Wimbledon doubles crown since 2012.