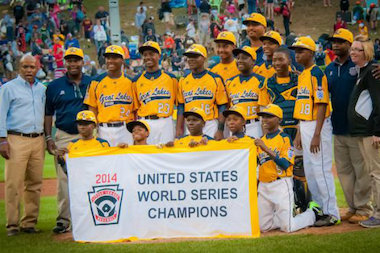 The Jackie Robinson West Little Leaguers from Chicago have been making history ever since their arrival in Williamsport for the 2014 edition of the Little League World Series.

They were the first team from the Jackie Robinson West LL to make it to Williamsport since 1983 and the first all black squad since the 2002 team from Harlem.

Yesterday they accomplished something those other two teams hadn’t.  With their 7-5 win over the Mountain Ridge LL in the US Championship game, they became the first ever all Black Little League team to become the US World Series Champions

The Chicago based JRW squad avenged their lopsided 13-2 August 17 loss to the team from Las Vegas to advance to the 2 PM CDT title game against Seoul, South Korea, who smashed defending international champion Japan 12-3 in their rematch to take the International World Series Championship crown. 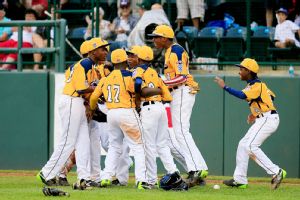 Best of luck to you Jackie Robinson West LL as you seek to make even more history later today and bring the Little League World Series Championship back to Chicago.