I’ll have to set aside some time to do so while I’m in Philly, but the 2014 FIFA World Cup finally starts group stage play later this afternoon.

The rest of the matches start tomorrow, and Team USA doesn’t get to start Group G play until the 16th.   Team USA will face off in Natal against Ghana, who eliminated us in the knockout rounds of the last two World Cups in 2006 and 2010. 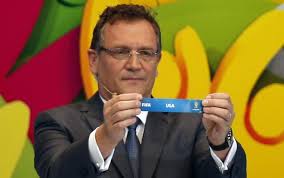 As to how Team USA will fare in a ‘Group of Death’ that features the FIFA number 2 ranked Germans, FIFA number 3 ranked Portugal and all everythang Cristian Ronaldo and FIFA number 38 ranked USA killer Ghana remains to be seen for our Jurgen Klinsmann coached FIFA number 14 ranked squad.

It’ll be a miracle if we even get out of the group stage.   But if Team USA wants to be taken seriously instead of sneered at as a soccer nation, this is the perfect opportunity for them to prove they can handle their soccer business while the whole world is watching.